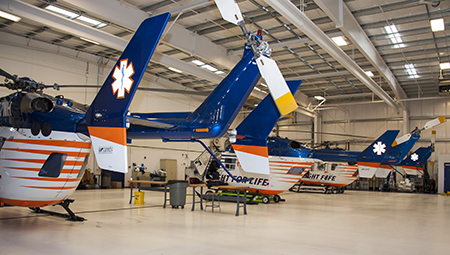 In August 2008, the Flight For Life Transport System expanded to establish a community base with a new hangar/corporate office facility at the Waukesha County Airport – Crites Field. The hangar is large enough to accommodate several aircraft, and equipped to allow most major maintenance tasks to be performed on-site. The building contains offices for administrative, aviation, and medical flight personnel, including pilot quarters. A complete inventory of medical supplies and equipment, including a special refrigerator for storing several units of O-negative blood, is also located adjacent to the hangar.

Additional space at the facility is allocated for staff meetings, educational presentations, and technology to support teleconferences and communication among all bases.

Flight For Life continues to maintain the sixth floor rooftop helipad/hangar facility (completed in 1993) located on the Milwaukee Regional Medical Center campus. It is utilized for patient transfers to Froedtert Hospital and Children’s Hospital of Wisconsin; two banks of elevators enable rapid, direct access to adult and pediatric Level I Trauma Centers, as well as trauma surgery suites in the operating room. Post patient transfer to the receiving unit, medical supplies are available in the hangar to re-stock the aircraft, necessary reports can be completed via computer access, and there is an on-site refueling system for rapid turnaround on back-to-back flights. This facility may also be utilized for continuing education training, and occasional maintenance support. Additionally, it serves as an emergency "back-up" location for the Communications Center.

The McHenry Base located on the south side of Centegra Hospital-McHenry in a separate building. The hangar was built in 2001 and the crew and helicopter moved there in December of that year. 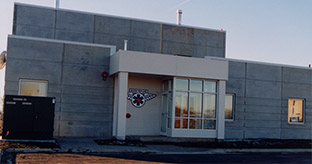 In December 2001, Flight For Life-McHenry moved into its very first hangar facility since the site began operations in May of 1987. The hangar is located on the grounds of the Centegra Hospital – McHenry in McHenry, Illinois. It houses flight crew and mechanic offices, pilot quarters, supplies, and has space to house and maintain an aircraft the size of a BK117.

There is on-site fueling for the helicopter with an adjacent foam tank for fire suppression. The hangar can accommodate up to two aircraft at a time and there is an auxiliary helipad just off the Emergency Department entrance that has space for two additional aircraft as well.